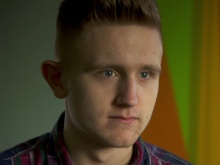 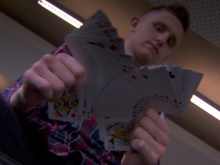 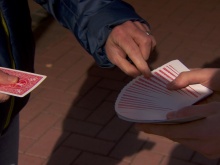 Magician Aaron McKnight wants to show young people that following their dreams is the trick to finding happiness.

His story was broadcast on ITV News Lookaround on Wednesday 15th April.

The 17-year-old from Carlisle became interested in magic at the age of fifteen and says learning the skill helped boost his confidence after years of bullying.

‘I hated school. I would get picked on all the time,’ says Aaron.

‘But when I discovered magic, the bullying stopped.

'I felt unique and valued for the first time in my life.

‘In my opinion, many young people these days don’t have ambition because they're scared of failure.

‘I intend to inspire others my age to believe in themselves and do something that they love.’

In the broadcast piece, Aaron performs card tricks on the streets of Carlisle.

With Fixers, he has helped to produce a film to motivate others to dream big and go for their goals.

‘I hope that sharing my story through a Fixers project will resonate with teenagers and give them the confidence to get everything out of life.’

Aaron, who is currently studying in Sixth Form, plans to take his campaign into schools and colleges around Carlisle.

He adds: ‘It’s crucial that we engage youngsters and this is the way to do it.

‘I understand that becoming a professional magician is hard, but the important thing is that I’m going to try.

‘My message is to always strive for your dreams and never settle for less than your best.’