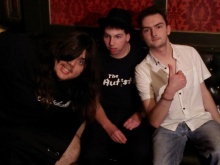 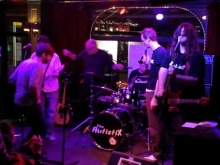 The AutistiX prepare for a gig 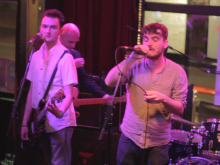 Wanting to show that people with autism are just as able as anyone else, a group from London are making music to showcase their talent.

Jack Beaven-Duggan (19) Luke Steels (18) and Saul Zur-Szpiro (21) all have autism and form the band The AutistiX, along with singer Jim Connelly and Jack and Saul’s dads, John and Michael.

They regularly perform at festivals and gigs for The National Autistic Society and Norwood and hope to inspire others by taking to the stage.

‘I’ve had so much rubbish over the years with people misinterpreting and misunderstanding autism,’ explains Luke.

Jack adds: ‘We’re here to encourage others who have difficulties.

'I’m keen to show how successful we’ve been to inspire people.’

The AutistiX were formed in April 2010 and have since performed to standing ovations and with singer Tom Jones.

With Fixers, they’ve helped create a music video to accompany their song ‘Just the Same’.

It follows the group behind the scenes as they rehearse and later perform at a venue in London.

Watch The AutistiX’s Fixers music video at the top of this page.

‘In terms of special needs and autism, sometimes people can criticise you and say you’re not clever,’ comments Jack.

‘We’re here to show just what having autism can actually do for you.’

The group are planning to share their music video on social media and hope to be able to play it at an upcoming gig.

Luke adds: ‘I wrote the song to show that we’re just the same as everyone else. We’re no different.

‘The film shows that message clearly.

‘I want people to watch it and think – I have autism – so what?’

Luke's project was supported by the Wellcome Trust.

The AutistiX feature in another Fixers project, helping Benice to raise
awareness of autism among ethnic minorities. Watch the film.