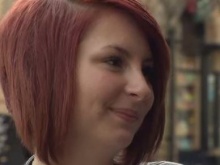 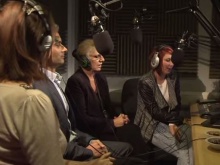 Veronica interviews an expert panel for the podcast 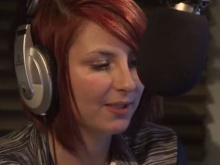 Veronica in the studio recording her radio show

Wanting individuals to be more open to the idea of intercultural relationships, Veronica Biegańska is encouraging people to embrace and accept each other’s differences.

The 17-year-old from Folkestone in Kent was born in Szczecin in Poland and is herself of a different nationality to her boyfriend.

She’s urging others to appreciate cultural variations, rather than shying away from them.

‘I spoke to someone who told me he would never be in an intercultural relationship because he believed it was wrong,’ explains Veronica.

‘Another person mentioned that they would be with someone from a different culture but never a different religion.

‘I want to see people from other backgrounds just getting together and making a relationship work.

‘It’s not about religion, culture or where you come from – it’s about who you are.’

With Fixers, Veronica has helped create a podcast of a radio show to be broadcast on Academy FM Folkestone.

It features a discussion on the topic involving a panel of experts, including psychotherapist Milan Dvorsky and Councillor Jenny Hollingsbee, Cabinet Member for Communities at Shepway District Council.

The views and experiences of other local young people also feature.

Listen to Veronica’s Fixers podcast by clicking play below.

Veronica adds: ‘I want people from different countries to hear this.

‘Ignore what you think people are going to say.

‘Instead, you need to focus on your future.’

Veronica’s also been speaking about her project on TV.
Watch her broadcast piece.