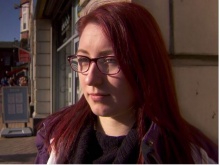 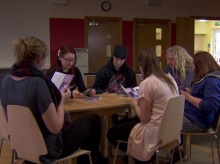 Paula shows her Fixers leaflet to a group of young people 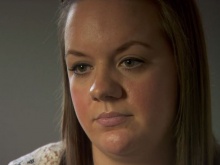 Her story was broadcast on ITV News Tyne Tees on Thursday 16th April.

The 25-year-old from Wallsend in North Tyneside is urging others to open up and seek help for the disorder, so it doesn’t disrupt their daily routine.

‘I never thought I’d have a normal life, living with anxiety,’ explains Paula.

‘Every day was a struggle.

‘I physically didn’t feel able to move and even going out the front door was daunting and it felt isolating.

‘This accelerated when I was 19 and my brother died. He was on his bike and was hit by a car. It was a really brutal thing to have to process.

‘Now I can look back and see that part of my anxiety surrounding going out was that I was afraid the same thing would happen to me.’

With Fixers, Paula has helped create a leaflet to explain the signs of anxiety and show people where they can get support.

She shares her resource with a group of young people in the broadcast.

To read Paula’s Fixers leaflet, click on the image below. 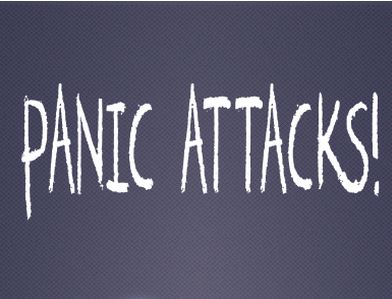 ‘Anxiety stems from the fact that you’re unable to predict the outcome of certain situations,’ Aimee says.

‘You begin to avoid those situations because your feelings are so overwhelming.

‘We think that over 50% of young people in Newcastle are dealing with anxiety.’

Paula adds: ‘It’s been a long journey to get to where I am now.

‘I feel very privileged to be in a position to reach out and share my experience.

‘It’s healing for me and I think it might help other people too.’

James Clark is also keen to use his experiences to help young people
overcome anxiety. Read more about his Fixers campaign.