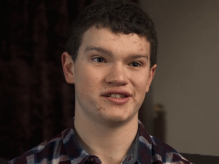 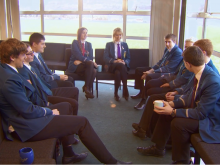 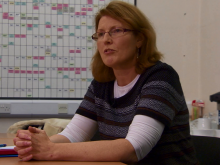 The 17-year-old from Larne in County Antrim believes that integrated schools are a good way to promote mutual respect and bridge cultural divides.

'I’ve been in integrated education since I began nursery school at the age of 3,' explains Chris.

‘The first time I noticed something different between me and some of my classmates was in primary school when we did our first communion. Only six or seven people joined me.

'I didn’t understand the differences between a Catholic and a Protestant.

‘My Fixers project is encouraging the government to provide more funding for integrated education so that schools can take in more pupils.’

Watch a short documentary introducing the campaign at the top of this page.

With Fixers, Chris and his team have helped create a film resource in support of integrated education.

It shows how this system of learning can help people see beyond their differences and realise what they have in common and features testimonials from a number of pupils.

‘I don’t really come across people who think it’s a bad idea for children from different backgrounds to be together,' she explains.

'It’s a process of change, but integration is really about choice.’

Chris adds: ‘If I can change one parent's mind and get them to consider sending their child to an integrated school, I’ll have been successful.’

Concerned that sectarianism in Northern Ireland is making young people
disillusioned with politics, Tiegan wants to show them their views still matter.