Love A Farmer Fix On ITV 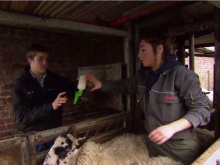 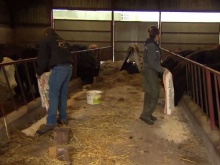 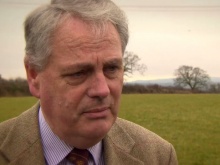 By offering insight into farming, Gemma Mitchell and Paul Gardner hope to encourage other young people to choose an agricultural way of life.

Their story was broadcast on ITV News Lookaround on Friday 20th February.

Gemma (17) and Paul (16) are both from North Cumbria and want to help others to better understand the industry that provides the country with food.

‘My dad is a farmer and I’ve been into it ever since I was little,’ explains Gemma.

‘There is always something to be done on a farm and the fresh air and responsibility is such a pleasure.’

Paul adds: ‘The plus side of all the hard work is the pride and joy that it fills you with.

‘There is nothing better than seeing a lamb and a sheep running around a field.

‘Having the freedom and being in the countryside is fantastic.’

With their average day starting at quarter to six, the young farmers’ tasks include feeding calves, checking on lambs and setting up animal beds.

‘I don’t think people realise how much work goes into it. They don’t see us getting up at silly hours in the morning to go and produce what they have to eat,’ says Paul.

‘I would say to a young person thinking of beginning farming that it’s a great lifestyle.

‘It might be hard but the rewards that you reap are phenomenal.’

Alistair Mackintosh from the National Farmers’ Union in Cumbria appears in the broadcast in support of the campaign.

‘I think Gemma and Paul are doing a fantastic job to encourage young people into agriculture,’ he comments.

‘It’s hard work but with dedication you can make a viable living and I would encourage anyone who recognises the challenges to go for it.’

Gemma adds: ‘I’d be happy if the public see that the food that gets put in front of them three times a day is a result of how we do things.

‘We want to show that we’re really passionate about what we do.’