Wanting to improve relations between different generations in her community, Sarah Davies is challenging the stereotypes attached to both older and younger people.

Her story was broadcast on ITV News Wales at Six on Thursday 8th January.

The 19-year-old from Builth Wells in Powys in Mid Wales and her group are aiming to bridge the gap between the ages.

They want to show that not all young people are troublemakers.

‘There was an incident on a bus when an older woman had opened the window and it was really cold,’ explains Sarah.

‘I asked whether she’d mind if I closed one of them and she went off on one, saying that I am not going to get anywhere in life with my attitude.

‘That was the moment I realised there was a big issue. People were looking for the negatives in every situation rather than the positives.’

In the broadcast piece, the team hear from some of the community's older residents, who share stories from their youth.

The resource includes quotes from older individuals, which many would associate with someone younger.

The idea is to celebrate what people have in common and not focus on their differences. 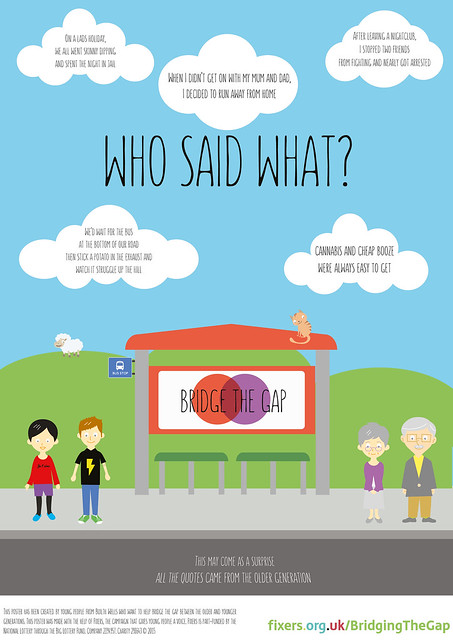 ‘It’s important that generations respect and work with each other,’ he says.

Sarah adds: ‘I think things would be better if everyone took the time to speak to one another, even if it was just a simple "hello" on the street or "can I help you carry your bags?"

‘It puts a good feeling back into the community and makes it a happier place.’

Worried that young people get a bad press, a group from Berwick-upon-Tweed
are also tackling negative stereotypes. Watch their Fixers film.