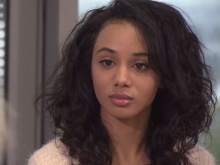 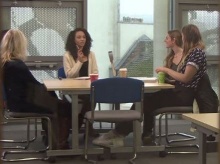 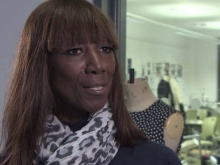 Left feeling excluded from the fashion industry after a battle with bone cancer, Elesha Turner wants to see more disabled models on the catwalk.

Her story was broadcast on ITV News Meridian (E) in January 2015.

The 21-year-old from Hastings in East Sussex had surgery when she was diagnosed with a tumour.

Half the bones in her leg were replaced with titanium, leaving her with a scar and on crutches as she learns to walk again.

‘I went on holiday with a friend and my leg hurt. I was sent for an X-ray and they found out that I had a tumour,’ Elesha explains.

‘It feels like your life has been taken out of your hands and put into someone else’s. When you meet the doctors, you’re literally saying save me, please.

‘Before, it had been suggested that I get into modelling, but after my surgery people were saying you can’t do this.

‘I’m still the same person - the only difference is I’ve got a scar on my leg.’

In the broadcast, Elesha visits the University of Brighton to speak to lecturers and students on Fashion and Textile Design courses. She asks for their views on the inclusion of disabled models.

‘It really needs to happen because I think the models on the catwalk at the moment aren’t actually representative of the general population,’ comments one member of the group.

Another adds: ‘It also gives the designers an opportunity.

‘They can say my clothing will fit anyone and suit anyone, whatever their lifestyle.’

Angel Sinclair, Founder of Models of Diversity, also appears in the broadcast piece in support of Elesha’s campaign.

‘None of the agencies will take people with disabilities because they’ll say there is no work for them,’ she explains.

‘Then you go to the brands and they say they don’t see these models because they don’t get sent to the castings.

‘Disability isn’t a choice - discrimination is.’

Elesha adds: ‘My ideal catwalk would include people of different ethnicities and abilities, to celebrate diversity in the world.

‘That’s what fashion is all about.'

Chelsey Jay is concerned that people with disabilities are under-represented
in fashion and media. Find out which TV actress is supporting her campaign.