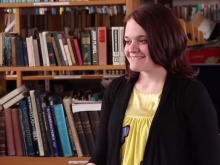 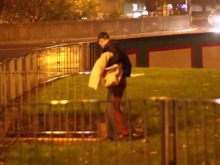 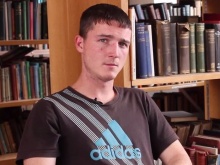 Fixer Oliver Winwood shares his story in the film

After finding herself without anywhere permanent to live at the age of 16, Antonia Weaver wants to help open doors for the homeless, by encouraging others to support those in need.

Now 22, she’s sharing her story to improve understanding of homelessness. She was placed in a hostel as a teenager, following conflict at home.

‘Everyone is human and sometimes people that are homeless just need someone to talk to,’ explains Antonia, who’s from Telford in the West Midlands.

‘I’ve not been street homeless, but I have been homeless.

‘My life was bad and I didn’t want to wake up.

‘I don’t want anyone else feeling the way I did. It’s a horrid feeling.’

With Fixers, Antonia and her team have helped create a documentary to offer insight into the different types of homelessness and what can cause a person to end up with nowhere to live.

She tells her story in the film, alongside fellow Fixer Oliver Winwood and ‘Sharna’, who is played by an actress.

The trio share their experiences of homelessness and how they’ve turned their lives around.

Watch the film ‘Homelessness: No one is worthless’ at the top of this page.

‘It’s so powerful, which is what I wanted.’

Antonia hopes to share her film as widely as possible, to ensure her story is heard.

‘My overall message is to get people to listen, understand, learn and help,’ she adds.

‘I don’t want people to take life or others for granted - because one day that could all be taken away.’

With the help of other young people who’ve experienced homelessness,
Antonia’s been talking about her Fix on TV. Watch the broadcast.