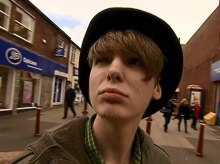 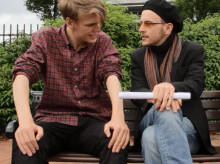 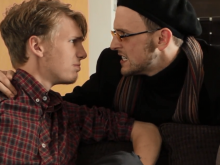 Jack with actor playing a director in the film

A 19-year-old from Altrincham, Cheshire is raising awareness of Asperger’s syndrome and educating others of its symptoms in an effort to end misunderstandings about the disorder.

Communication can be difficult for Jack Simmons, who perceives the world as a giant film set because of the condition.

‘It can be hard some days,’ explains Jack, who was diagnosed at the age of five.

‘Although I’m quite an outgoing person, I often find group scenarios challenging and they can sometimes make me feel as though I’m unable to speak.

‘When I tell people my Asperger’s syndrome makes me feel like I’m always in a film, many don’t know what I’m talking about.

‘My aim is to increase understanding about the complex condition by showing how it can affect people in everyday life.’

With the help of Fixers, Jack has produced a short film, which shows how people with Asperger’s often understand things differently to others.

The short comedy puts the main character, played by Jack, at the centre of a television show, where the director occasionally corrects him whenever he misinterprets something because of his condition.

Watch his Fixers film 'Asperger's Awareness' at the top of this page.

‘It’s something I can definitely relate to because I know what it’s like to feel out of place and misunderstood.

‘Although the film is funny, I think the message behind it is serious, which I think is important to get across.’

Jack hopes to take his film into schools, educating other young people about Asperger’s and how the disorder affects those who have it.

‘I’ve really enjoyed working with Fixers. They’ve given me the chance to raise awareness of an issue which I care a lot about,' he adds.

‘All I want is for people to have a basic understanding of Asperger’s, so if one day they meet someone like me, they’ll know what to expect.’

Jack has also shared his story on television.
Watch his film on ITV Granada Reports.