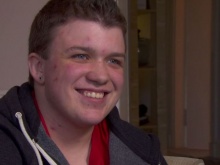 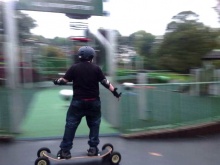 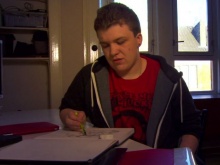 His comic book aims to raise awareness on hypermobility syndrome

Discovering the lack of awareness of joint hypermobility syndrome – even among medical professionals – Luke Murphy from Blantyre is raising the profile of the condition, which has drastically altered his life.

His story was be broadcast on STV Glasgow's Riverside Show on Thursday 27th November.

The 19-year-old says having hypermobility affects his daily activities and has prevented him from pursuing a number of careers.

'Doing small tasks like opening a can of juice can dislocate my thumbs,’ explains Luke.

'I've been rock climbing since I was four years old and was looking at a career in it but I dislocated my knee on a job interview.

'I went on to look at a career as a chef but dislocated my shoulder pulling apart a chicken.

'I actually have multiple dislocations every day.'

It's thought that about 1 in 5 people in the UK have hypermobile joints, and Luke wants more people to know about the condition, as he found fighting for a diagnosis became part of the problem.

'Not a lot of people are aware of what hypermobility is – particularly doctors,' he explains.

'I was diagnosed in April this year, but I've had issues since I was about thirteen.

'If you have a diagnosis, there is more understanding and support.

'Without it, they start to question whether the fact that you're in hospital a lot with dislocations is mental health related.'

Using his skills as an artist – a talent he finds has hidden benefits - Luke is planning to create a comic book with the help of Fixers to show others what it is like to live with hypermobility syndrome.

'Distraction is the best pain relief,' he says.

'There are a lot of people who have the condition and they can tell you what it’s like to live with it.

'However, I want my comic book to be for health professionals.

'I am looking to raise awareness so that when you tell others you've got hypermobility, they don't have to ask what it is.’

Imagine what we could see with x-ray vision? Take a look at
Nicole Martin’s insightful poster series on hidden illnesses.