Making It In The Media 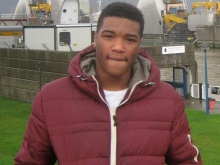 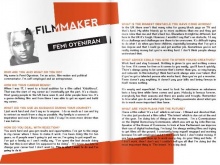 A page from Jordan's Fixers booklet 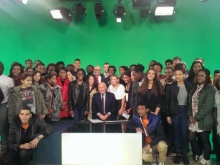 After turning to an actress, film-maker, songwriter and journalist for advice on forging a successful career in the media, Jordan Moore hopes that sharing their words of wisdom will inspire others.

The 21-year-old from Romford, who’s studying for a media and communications degree, wants to help graduates find success in an industry that he believes is changeable and unpredictable.

‘I feel that we’re sold a dream that when we leave university we’ll be guaranteed a job in the field of our choice,’ Jordan explains.

‘I know it doesn’t work that way. I’ve seen my friends struggle and their confidence waver, and that’s hard to watch.

‘I want to make people aware that they have to do more than what’s expected of them during their time at university.

‘Those who are living their dreams and doing what they want to do in life have got there because they thought outside the box.’

With Fixers, Jordan has helped create a booklet containing a collection of interviews with media professionals.

Laurence Hobbs, Femi Oyeniran, Yvonne Hays and Gavin Ramjaun provide insight into their careers and experiences, and offer advice to anyone wishing to follow in their footsteps.

Read Jordan’s booklet ‘How I Broke into the Media Industry’ below.

‘I really like how the booklet looks. It’s easy to read and I think it will benefit anyone who chooses to look at it,’ Jordan says.

‘I think the most important things that should be taken away from it are that with hard work, determination and focus, anything is possible.'

Jordan launched his booklet at ITV’s Open Newsroom Day in London on Thursday 16th October. Around 80 young people visited the studios and were handed a copy of Jordan's resource, after hearing from Jordan and watching his broadcast film.

‘The booklet is available to everyone, but especially those looking for guidance in the media industry,’ Jordan adds.

‘It’s very competitive and you need to be able to prove your worth.

‘There’s no room for doubt. Have a goal in mind and be prepared to do lots of different things in order to get there.’