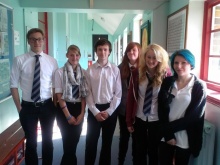 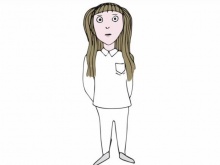 An animated character features in the Fixers film 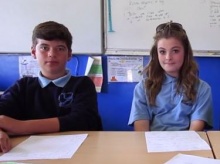 Year 7 students offer advice to younger pupils in the film

Giving Year 6 pupils a lesson in what to expect when they start secondary school, a group of sixth-formers from Powys in Mid Wales are hoping to settle any first day nerves.

Led by 17-year-old Oliver Lanz, the team from Ysgol Bro Hyddgen in Machynlleth, want to reassure younger students who are about to change schools, lessening any fears they may have.

‘I remember the transition and it was pretty nerve-wracking,’ Oliver explains.

‘I was anxious I’d lose my close friends and I would be segregated from everyone else.

‘Now I realise that was foolish and worrying only made it worse.’

With Fixers, the group have helped create a film designed to prepare primary pupils for the move to secondary school.

Featuring a mix of live action and animation, a young girl asks questions of current Year 7 pupils, who try to put her mind at rest.

Among the topics covered in the video are new friends and teachers, homework, breaks and the size of the school.

You can watch the film ‘Primary Transition’ in English at the top of this page, and find the Welsh version below.


'I remember walking around school clueless as to where to go because it seemed so big to me then,’ says Oliver.

‘Now I realise it was a pretty small school.

‘I think the film will be a success. We asked some Year 7s to help with the filming so that those who watch the video will have someone to empathise with.’

The group plan to show the film at local primary schools. They hope it will result in fewer children moving up to secondary school feeling scared or lost.

‘The message is not to worry,’ Oliver adds.

‘You’re going to be spending the next five years with the people you’re about to meet - and the teachers are there to help.’

Talking about their Fix on TV, the group share their memories of the
transition between primary and secondary school. Watch the broadcast. 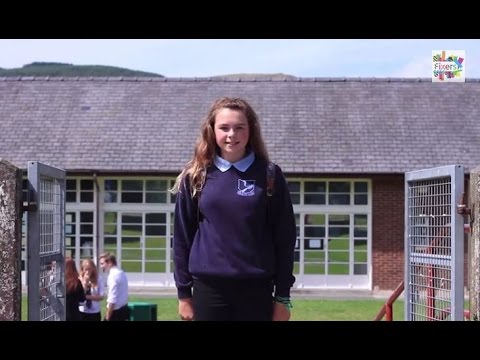