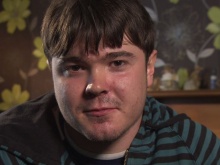 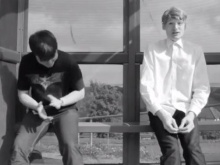 Alex (L) plays the role of Alfie in the Fixers film 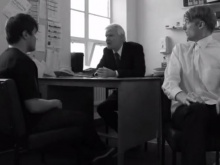 Shedding light on an aspect of autism that he feels isn’t widely understood, 21-year-old Alex Lowery from Holywell in North Wales wants to show others what it means to stim.

Stimming is short for self-stimulatory behaviour and involves making involuntary repetitive movements like rocking back and forth.

It helps Alex, who has an autism spectrum disorder, to process his thoughts and emotions - but he feels it can be disconcerting for others who don’t understand what he’s doing.

‘Stimming can cause many different reactions from outsiders,’ Alex explains.

‘It can appear frightening to some and it can also make people concerned about the person who is stimming.

‘One time a man came up to me because he was worried I was having a seizure.’

With Fixers, Alex has helped create a film to explain stimming.

It informs viewers that for someone with autism, repetitive actions can be calming, relieve anxiety and stimulate the mind.

The video tells the story of fictional characters Timmy and Alfie. Timmy is urged not to jump to conclusions about Alfie, after seeing him rocking and clapping his hands at a bus stop.

The overall aim is to promote understanding and acceptance.

You can watch the film ‘Stimming – A Social Guidance Video’ at the top of this page.

‘I’m impressed with the film and hope it serves its purpose,’ says Alex.

‘I’m passionate about raising awareness of stimming as few people have heard of it.

‘Those that have heard of it sometimes get the wrong end of the stick.’

Alex, who’s a public speaker on the subject of autism and has written an article about his views on stimming, plans to share the film on his website.

He also hopes to use it when he gives talks on the topic to children and young people.

‘I would like my project to help people understand stimming better – realising that it’s nothing to be afraid of or worried about,’ Alex adds.

‘I hope it might even help parents of children who have autism to understand their child’s behaviour better.’

Alex's project was supported by the Wellcome Trust.

Telling his story on TV, Alex enlisted the help of an actor to show how people
react to someone stimming in public. Watch his broadcast film.