Piping Up For Tradition 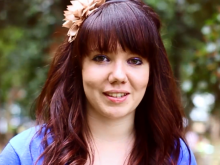 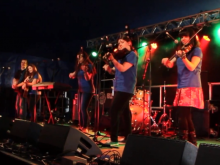 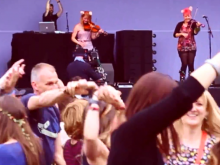 People dancing at the Belladrum Festival in Inverness

Concerned that disciplines such as bagpiping and Gaelic dance are becoming lost, the 24-year-old from Inverness wants to preserve what she feels is a piece of Scottish heritage.

‘I started playing the fiddle at the age of ten and I absolutely love it,’ explains Rachel.

‘Scottish music is part of my identity and I feel it needs protecting, but sadly some people consider it to be uncool.

‘I hope this project encourages more young musicians to explore the possibilities of traditional music and keep this culture alive.’

Rachel, who is part of a local youth band, recently formed the Caledonian Ceilidh Trail.

The voluntary project gives young people aged 16-25 a chance to audition for a band and become a touring musician for three weeks a year.

With Fixers, Rachel has produced a short documentary, which covers performances from this year's successful candidates, who performed at the Belladrum Festival in Inverness.

Watch their Fixers film 'Traditional Scottish Music' at the top of this page.

‘The Ceilidh Trail has given me an insight into how performing in front of a crowd can bring out somebody's confidence.

‘I wanted to show how traditional Scottish music has impacted the lives of other young people, which I think the documentary does really well.’

Rachel intends to share the film on social media and also take it into schools around the Highlands.

She adds: ‘This is something I'm extremely passionate about.

‘Many young musicians learn how to play a traditional instrument, but then aren’t given the opportunity to progress with their skills.

‘This is why it’s important we support youth bands and projects such as this, so Scottish music can continue for generations to come.’

See why Glasgow Fixer Khizer Asghar is encouraging young people
to preserve their family history by speaking to their elders.