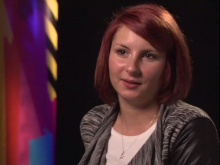 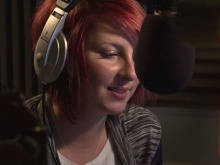 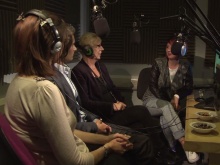 A panel discuss intercultural relationships in the studio

She moved to the UK from Poland six years ago - now 16-year-old Veronica Biegańska is encouraging people to celebrate cultural differences in relationships.

Her story was shown on ITV News Meridian (E) on Thursday 6th November.

Veronica, who lives in Folkestone in Kent, wants to promote the benefits of intercultural relationships, where a couple can respect each other’s backgrounds and beliefs.

‘I was born in Szczecin in Poland and I came to the UK when I was 10,’ explains Veronica.

‘When I was going out with a Polish guy, everyone accepted it.

‘But when a Czech guy turned up, people said "you’ll find someone better" and "he’s not right for you".

‘The message is not to listen.

With Fixers, Veronica is helping to create a radio show and podcast, focussing on the topic of relationships that bridge cultural divides.

She’s enlisted the help of a panel of experts, who are filmed in the studio taking part in a discussion for her TV piece.

Community Engagement Consultant, Julie Larner, is one of the panellists who appears in the broadcast in support of Veronica’s campaign.

‘At the end of the day you are encouraging young people to think about how they can come together and value what makes them different – rather than to think about their differences negatively.’

Milan Dvorsky, who’s a psychotherapist, also sits on the panel, and offers his views in the broadcast film.

‘Inevitably there are differences between us, especially if we come from different cultures and backgrounds,’ he comments.

‘Although this can lead to conflict, when we come together there’s a massive opportunity for enrichment.’

Veronica adds: ‘We’re all the same - just some people have a different point of view.

‘I hope my project helps young people to be more open with those from other backgrounds.

‘You can learn a lot. People coming together is better than people being apart.’

Encouraging respect between people of different nationalities is also on the
agenda for Ernest and his team from Folkestone. Watch their music video.