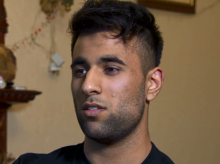 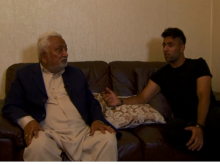 Khizer with his grandad 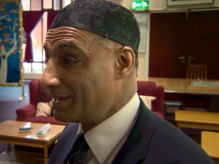 Inspired by his grandfather’s remarkable voyage from India to Glasgow, Khizer Asghar wants more young Asian Scots to remember the struggles many of their elders encountered in search of a better life.

His story was broadcast on STV Glasgow’s Riverside Show on Thursday 30th October.

Concerned that many of these gripping tales are being lost, the 18-year-old is calling for others his age not to forget their cultural heritage or their family’s personal histories.

‘My grandad, Jamil Ahmed, was born in the Punjab area of India,’ explains Khizer. ‘He believed that there was a better life out there and decided to explore new countries to see what opportunities there were.

‘He didn’t take a plane or a ferry. It was buses, trucks, getting rides off people and walking great distances.

‘They know where they came from and why, but unless we talk to them, we won’t get to know that side.

‘My Fixers project is to get young Asian Scots to engage more with their grandparents.’

In the broadcast piece, we hear from 90-year-old Jamil, who tells his grandson Khizer about some of the ordeals he faced when travelling across the continents.

He recalls one particular incident when he was stranded on the border between Turkey and Iran.

‘They said I had no endorsement to Turkey on my passport,’ he says.

‘I stood on the road crying. The border people said I couldn’t go anywhere and the buses had gone.

‘So I started walking 150 miles from there to Tehran.’

Also featured in the television item is Asif Mohammed from Glasgow Central Mosque, who stresses the importance of recording some of the stories from other first generation Scottish Asians.

He says: ‘These are very touching stories and once others see the hardships that they encountered, people might make these changes to their own lives as well.’

Khizer adds: ‘Nobody knows how long they will live for, but hopefully one day I can show my children how hard it was when my grandad came over.’

Nigerian refugee Emmanuel Anusoro came to Glasgow as a penniless stranger. See how the Fixer credits the city with changing his life.