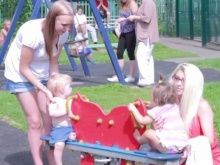 Fixers Jade (L) and Shyanna (R) with their children 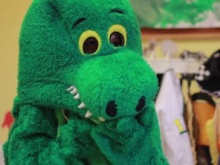 The young mums wear a monster costume in their film 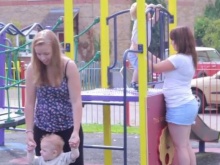 Bethany (L) and Rebecca (R) appear in the Fixers film

Forced to grow up fast after having babies in their teens, a group of young mums from Canterbury say they’re fed up of being labelled bad parents because of their age.

Jade Smith, 18, Rebecca Clout, 16, Bethany Luney, 18, and Shyanna Tanner, 20, want to challenge people’s negative perceptions, by showing that they’re just as capable of looking after children as anyone else.

‘We do think there is prejudice towards young mothers,’ explains Jade, speaking on behalf of the Canterbury Young Active Parents group.

‘It’s unfair that everyone assumes we’re not going to be good mums.

Shyanna adds: ‘We prove people wrong because they think that it’s age that matters, when really it’s how you look after your child. Whatever age you are, you can do the same things to be either good parents or bad parents.’

With Fixers, the group have helped create a film to share their experiences of parenthood and the reaction they receive when they’re out with their children.

Believing that members of their community judge them unfairly, they’re each seen wearing a monster costume in the video to represent how the opinions of others make them feel.

‘The general message is that we’re not monsters,’ says Jade.

‘We’re really not as bad as some people seem to think we are.’

You can watch the group’s film ‘Mums, Not Monsters’ at the top of this page.

The Fixers are planning to show their film at Canterbury City Council in November, and also want to share it with their friends and family.

Jade adds: ‘Sometimes we’re given looks that say you don’t deserve any children and that’s upsetting and confusing because I can’t understand why people would think like that.

‘We hope our project will show older generations that young people can make good mums.

‘We can look after our children.’

Keen to spread their message, the group have taken their campaign to the
streets of Canterbury. Watch their TV story to see what happened.