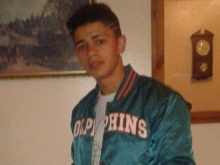 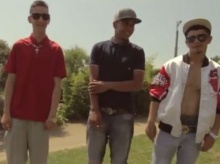 Ernest (R) and his friends perform in the music video 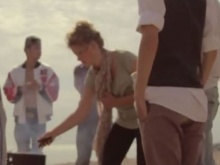 Young people of different nationalities feature in the film

Using music to bring young people of different nationalities together, 16-year-old Ernest Gunar and his team hope to break down barriers and encourage mutual respect.

The group from Folkestone in Kent want to promote community cohesion.

They're asking others not to unfairly judge those they don’t know.

‘I’m from Slovakia and to live in this country it’s important that I get along with other people,’ Ernest explains.

'Some people will perhaps think they know one Slovak who is bad, so they consider us all to be the same.

'But, we’re all humans and we shouldn’t judge others.

'We should respect them.’

With Fixers, the group have helped create a music video to accompany a song they’ve written.

Featuring Ernest and his friends, who are also of Eastern European origin, and students from the Folkestone Academy, the film shows the young people overcoming their differences and getting to know each other.

Some of the lyrics are performed in Czech to highlight what can be achieved when people of various backgrounds join together.

Watch the group’s music video ‘Can We Come Together’ at the top of this page.

‘The video is just great. I can’t believe I’ve had the opportunity to do something like this,’ says Ernest.

‘It was good to work with a group from the Folkestone Academy. They didn’t care where we’re from - they just got along with us and made the song.’

As part of their bid to end segregation between young people of different cultures in their area, the Fixers’ video draws attention to the words ‘community’ and ‘unity’ in the chorus.

The lyrics also reference Payers Park, an area of green space created in Folkestone to be used by all sections of the community.

The group performed their track at the park’s launch in August, as part of the Folkestone Triennial.

‘There were loads of people looking at us,’ Ernest adds.

‘They were from different cultures – Slovak, Polish, Czech and English – and they were all excited to hear us.

‘I felt really proud. I want to carry on like this, to show people that it’s right to respect each other.’