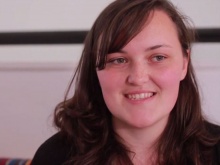 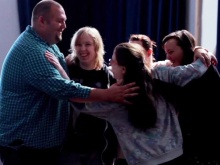 The Fixers demonstrate the benefits of peer support 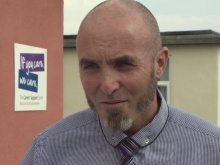 Concerned by the lack of support for 18 to 25-year-olds who look after a loved one, Carina Andrews and her team want more help to be made available to young adult carers.

Led by 21-year-old Carina, the group from Bristol and South Gloucestershire feel that while they did receive support up until the age of 18, this stopped shortly afterwards.

‘People know about young carers and they know about adult carers,’ says Carina, who first began looking after her mum when she was five.

‘But, we find there’s a gap where people don’t understand that there are young adult carers, who are between 18 and 25.

‘We’re at the age where we’re just starting our lives - beginning university, moving out and getting into relationships. For somebody that has a caring responsibility, those things can be very difficult.’

Fixer Annie Cash (23) also shares her experiences in the broadcast. She cares for her mum, who’s registered blind and has had her leg amputated.

‘When I hit 18 all support stopped. You’re expected to just get on with everything because you’re an adult,' Annie says.

‘Really your life is just as hard, but now it feels like no-one cares.’

With Fixers, the group have helped create a film to highlight the challenges faced by young adult carers.

They also hope to show others the benefits of peer support groups, after starting Eighteen Plus in their area.

‘There is support out there for both young carers and adult carers, but this particular group is different,’ he explains.

‘Their needs are very different to the needs of most of the adult carers that we support.’

Carina adds: ‘We started the Eighteen Plus young adult carers group to reach out to those with caring responsibilities who are at a transition point.

‘It would make me happy if people were to watch the film and really remember the term young adult carer, considering the impact of the role on a young adult’s life.’

Also caring for a relative, Hannah wants to show others that they don't have
to put their own lives on hold while they look after someone they love.