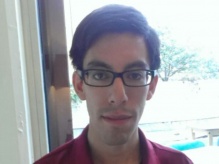 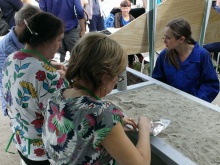 People get involved in the group's workshops 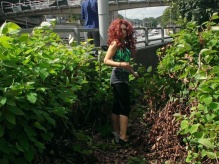 Armed with concrete and seeds, a group of artists from Hackney Wick in London have found an innovative way to bring their community together.

Led by 25-year-old Sebastian Hau-Walker, the team have been encouraging people in the area to communicate and interact with each other.

With the help of Fixers, they hosted two days of workshops and performances inspired by the regeneration of nearby Mabley Meadow.

Originally created by local residents, the area of green space was badly damaged by flytippers in 2013.

‘It takes a long time for things to grow, and we wanted to do something to help initiate the gradual regeneration of the meadow,’ Sebastian explains.

‘So, we took the subject but looked at it in a different way. When people think of regeneration in London they tend to think of built-up, concrete areas, with green spaces often overlooked.

‘During our workshops people were invited to create their own miniature concrete island, which doubles-up as a small garden.

‘Set in concrete with seeds mixed in, the idea is that when the seeds grow, the island will break apart.’

The arts project formed part of the Hackney Wicked Festival that took place on 2nd and 3rd August.

Sebastian and his team, who are all members of the Cluster Bomb Collective, estimate that around 40 people engaged in their workshops and the promenade performances that followed.

The performances took people to the meadow, where they were able to plant seeds to symbolise and encourage regrowth.

‘It was all about people coming together and walking through parts of their local area that they haven’t been to before,’ Sebastian adds.

‘We felt a divide between the artistic community and the residents living here, and we wanted to overcome that and bring everyone together.

‘We hope we’ve shown that things take time and that a lot of work is happening in Hackney Wick.

‘We wanted to encourage conversation about that between different groups of people that wouldn’t necessarily meet each other every day.’

Also concerned with revamping and reviving a community garden,
a group of Fixers from Bristol unveiled their handiwork
to the Minister of Civil Society Nick Hurd.