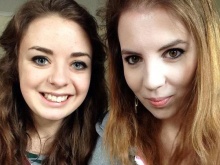 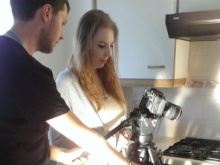 The team help to create their Fixers film 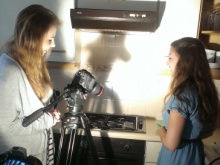 The film urges others to look after their mental health

Following her own battles with mental health, Miriam Jarvis is encouraging others to talk about their problems before they become overwhelming.

The 19-year-old Fixer and her friend Alice (18) from Plymouth, want to reassure young people with mental health conditions that recovery is possible.

'I struggled with mental illness throughout my teenage years,' explains Miriam.

'I didn't understand it and feel that had I known more about it, I would have been able to catch it earlier and seek support.

'It might have prevented the rapid escalation into the darkest times of my life.'

Alice adds: 'We chose this topic because we want to raise awareness and show people they aren't alone.

'If you do have difficulties, it can get better.'

One in four people in the UK will experience a mental health problem in the course of a year, and the Fixers are concerned that, in young people, these conditions are often misunderstood.

‘Struggling from a young age was difficult, because many blamed it on hormones or tiredness,’ says Miriam.

'Everybody has a mental health just as we all have a physical health.'

With Fixers, the team have helped create a film to be shown in secondary schools and to those affected by mental illness.

It shows the impact of a mental health condition and explains that seeking support can be life-changing.

Watch the film ‘Mental Health Awareness: Cracked’ at the top of this page.

'I'm pleased with the film - I really like it. It gets our message across in a simple way,' explains Alice.

'It provides people with a personal point of view on these issues.'

'There is a life beyond mental illness.

‘Recovery is possible and you are worthy of it.'

Wanting more teenagers with depression to open up about their feelings,
figure skating Fixer Holly hopes her campaign will break the ice.