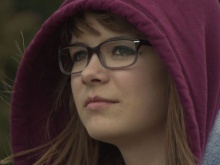 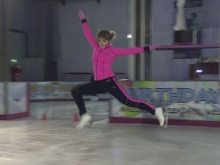 Holly demonstrates her figure skating in the broadcast film 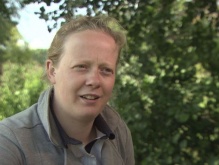 Wanting more teenagers with depression to open up about their feelings, figure skating Fixer Holly Westwood has launched a campaign to break the ice.

Her story was shown on ITV News Central on Thursday 4th September.

Having experienced her own mental health issues, the 17-year-old from Burntwood in Staffordshire wants to show those with similar conditions that they’re not alone.

'I've struggled with anxiety, depression and stress since my early teens,’ Holly explains.

‘I felt low and I started to isolate myself from my friends and family.

'Some days I wouldn't want to get out of bed and when I did go to school I had anxiety attacks. It made it worse because people were pointing and laughing at me.

'Looking back now I see that I wasn’t actually alone. I just didn’t give people the chance to support me.'

With Fixers, Holly is helping to create a film focussing on her passion for figure skating and how it’s enabled her to cope with her depression.

'Figure skating was my escape from day-to-day life and from being judged by other people,' she says.

'It was where I could go and be myself.

‘I hope the film will encourage other young people to seek help.’

Danni Kennerley, from Changes Health and Wellbeing, appears in the broadcast in support of Holly’s campaign.

'I think it's quite common for young people to feel alone when they are in mental distress,’ Danni explains.

‘In some ways that’s part of it, feeling that you can’t connect with other people.

'It's more common than you would imagine.’

Holly adds: 'Doing my project has made me realise there are so many young people out there feeling isolated because they have a mental health problem.

'I've approached people and I've asked if they need to talk.

‘It's a nice feeling knowing that you have helped somebody else.'


See how Fixer Mia Sweet uses animation to convey
the loneliness of depression.