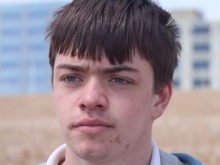 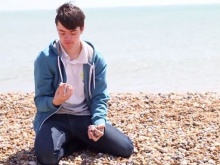 Harley's Fixers film is shot at the beach 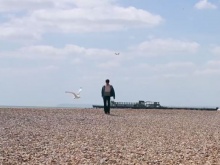 Harley tells his story in the film

After bullies left him feeling miserable, worthless and insecure, Harley is telling his story to help stop others facing similar abuse.

The 20-year-old says he was subjected to cruel taunts and actions from an early age, and wants to prevent other young people experiencing the same.

‘I want to raise awareness about bullying in schools and colleges to try to help end it,’ Harley explains.

‘I was bullied and it left me feeling lots of different things – including lonely and upset.

‘The bullies would chase me and try to beat me up most of the time.  Although sometimes it did also involve them calling me names.’

With Fixers, Harley has helped to create a film to share his experiences.

He speaks openly about how being bullied caused him to feel and the impact it had on his education. He also offers hope to others, explaining that his situation has improved now that he has a good group of friends.

The film ends with a stark reminder that bullying can lead to low self-esteem, stress, depression, anxiety and even suicide, and asks the question, ‘Isn’t it time for it to stop?’

You can watch the film ‘Bullying: Harley’s Story’ at the top of this page.

‘The film is set on the beach and I love it,’ Harley says.

‘I want to show it to teachers and pupils at schools and colleges so that they realise that being bullied – or bullying – isn’t nice. It can have a real effect on people.’

As well as wanting to show his film to students, Harley hopes it will be shared widely online.

‘My experience of working with Fixers has been absolutely brilliant,’ he adds.

‘It’s allowed me to do what I’ve always wanted to do – to show teachers in schools what’s happening behind their backs.

‘I hope it helps them sort it out.’

For more information, help and advice on bullying, visit the Beat Bullying website.

Eloise Sears wants you to join her in taking a stand against bullying.
Find out more about her campaign.