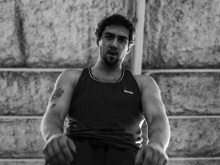 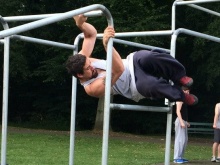 Ahmed doing parkour in the film 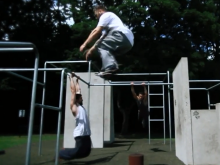 Ahmed Saricicek and his team of street acrobats from Sheffield are jumping into action in a bid to flip negative misconceptions of parkour on their head.

Concerned that their sport - a form of freestyle outdoor gymnastics - is seen as anti-social, the group are determined to make its many positive attributes known to the public, which include boosting confidence and improving fitness.

Twenty-four-year-old Ahmed, who has been teaching the discipline in Sheffield for the past six years, explains: ‘It’s completely changed my life.

‘On a basic level, it’s about jumping over things and having fun, but if you look deeper it teaches you how to problem solve and think independently.

‘It gives people the belief that they can overcome anything and that’s what our campaign seeks to promote.’

With Fixers, Ahmed and the team have created a short film, which highlights the capacity of parkour to inspire self-expression and personal development.

Featuring members of the group, it showcases the activity as an art form, which keeps young people agile and focussed.

Watch their film 'Parkour' at the top of this page.

‘The film looks fantastic and Fixers have done a great job capturing our message,’ adds Ahmed.

‘Many youngsters today resort to computer games and television to have fun, but we wanted to show how outdoor activities like parkour can be a healthier alternative.’

The group, whose Fixers campaign was featured on ITV News in January 2014, plan to share their Fixers film on social media, in local schools and also to use it in training classes.

They hope it will inspire more people to take up the discipline, while also showing critics its physical and mental benefits.

‘It’s a real shame that the sport isn’t widely recognised, but hopefully our campaign will fix that problem,’ Ahmed says.

‘Seeing a shy young person blossom into a confident, more driven individual all because of doing parkour is truly one of the best feelings in the world.

‘So give it a go and change your life!’

Tired of the negative misconceptions of parkour, Fixer Leigh is showing how

the sport is a form of artistic expression. Watch his Fixers film.