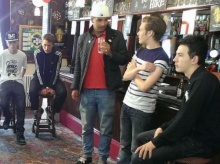 The Kent Fixers shoot their film 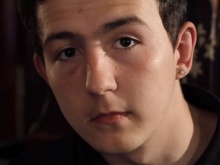 Tamer plays a man abused by his partner in the film 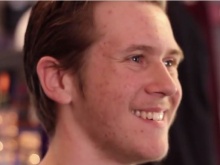 Fixer Danny Scott also has a lead role in the film

By showing a man being verbally and physically attacked by his partner, Tamer Maclean and Danny Scott want others to realise that it’s not just women that experience domestic abuse.

Their team from Kent are tackling the misconception that men are always the perpetrators in abusive relationships, in the hope that it will encourage more male victims to seek help.

‘I don’t believe in domestic violence from either partner,’ explains Tamer (19) who’s leading the campaign with Danny (17).

‘The message is that this can also happen to men. It’s always better to speak about your problems than to keep it to yourself.’

With Fixers, the group from Folkestone have created a film showing a man in an abusive relationship.

Scenes of the main character with his friends at the pub are interspersed with shots of his private life, which he keeps hidden from them.

At home, he is accused of cheating, forced to scrub the toilet and criticised by his partner, who is also seen hitting him.

Watch the film ‘Speak Up: Domestic Abuse Against Men’ at the top of this page.

‘I think the film has come together exceptionally well,' says Tamer.

‘I would like this inspirational message to go out to young men to raise awareness.’

According to figures reported by ManKind, a charity that provides support for men experiencing domestic violence, two in every five victims of abuse are male.

The Fixers are keen for their film to be seen by teenagers who are new to relationships, as well as men who are older and more experienced.

‘I hope to get across to young people that domestic violence happens to men all over the world – men can be victims just as much as women,’ Tamer adds.

‘I want this project to inspire men going through the traumatic experience to speak out and not to be afraid.’

For more information and support for male victims of domestic abuse, visit the ManKind website.

Paris Robin is also highlighting the problem of domestic
abuse against men. Watch her Fixers film.