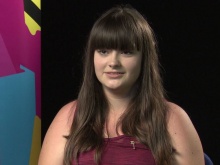 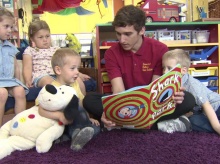 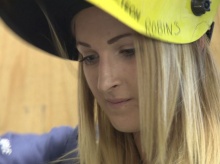 Robin Williams studies welding and appears in the TV film

Questioning why there aren’t more men working in childcare, or a higher number of female mechanics, Chloe Gallagher wants to challenge gender stereotypes in the workplace.

Her story was shown on ITV News Anglia on Thursday 7th August.

The 17-year-old and her team from Lowestoft think it’s wrong that young people feel pressured to make career choices based on whether they're male or female.

‘When I was 14 at school and you picked your options, people got divided,’ Chloe explains.

‘Boys went straight away to construction and girls to hairdressing.

‘I don’t think there was anybody in the school who did the opposite of what you would think. They’d get the mick taken out of them.

‘You get taught about equality and how people should be treated the same, but I don’t think gender stereotyping is any better than it was years ago.

‘It’s still going on now and that’s what we want to change.’

With Fixers, the group are making a film set in a hospital that will show men and women in job roles that some might not expect.

They hope it will encourage others to rethink any preconceptions they may have.

Rachel Bunn, Curriculum Manager at Lowestoft College, appears in the broadcast piece in support of the campaign.

‘I think Chloe’s project is inspirational,’ she says.

‘There does seem to be a pattern locally of students following more traditional jobs and career choices that are linked to gender.

‘Unfortunately we do get some students at the college not following their heart and actually choosing careers that maybe their parents feel are best for them.’

Ryan Burchell, a male childcare student, and Robin Williams, a female welding student, also feature in the TV film, to show that it is possible to break the mould.

‘Girls don’t choose welding, because they think they’re going to get bullied or they don’t think they’ll fit in,’ Robin explains.

‘But it’s not like that at all. Don’t choose an option because your friends are doing it or your mum wants you to do it.

‘You’ve just got to think that’s something I’m passionate about – let’s go for it!’

Chloe adds: ‘I hope this film will be shown in schools across East Anglia.

‘I want the teenagers that see it to realise that any job they want to do is open to them.'

Fixers are also tackling gender stereotyping in sport. See why Hannah
and her team don’t want boys to be put off dance, or girls to rule out football.