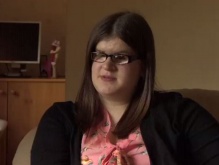 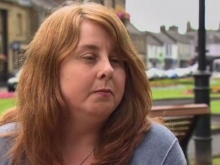 Natalie Doig from the RNIB 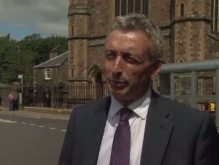 Catching a bus might seem like a simple task for most, but for partially-sighted Katrina Thomson, it can be a serious challenge.

Her story was broadcast on ITV News Lookaround on Thursday 7th August.

Having been born with a rare type of eye cancer, the 21-year-old from Hawick in the Scottish Borders wants bus drivers to be more aware of the special needs of some passengers.

'When I was six or seven years old, my mum noticed when they were taking pictures that my eyes looked like a cat's.

'She took me to the doctors and they diagnosed me with retinoblastoma.

'Because of my condition, I find it really difficult to know when the bus is coming.

'If you're in a city and two or three buses pull up at one time, knowing which bus to get on is also quite hard.

'If I don't notice a bus, the chances are it could just drive past.'

Natalie Doig, a Campaigns Officer for the RNIB, appears in the broadcast to support Katrina's campaign, stating:

'Around eight out of ten blind and partially-sighted people miss hospital appointments, job interviews or even just going on a date because a bus doesn't stop for them.

'They might be waiting, waving the white cane to attract the bus and the buses just drive past.'

In the broadcast, Katrina meets with the managing director of First Borders, Paul McGowan, to discuss the issues those with seeing difficulties can face on public transport.

'I think the meeting went really well. It's good to hear things from the RNIB's perspective, and also to meet Katrina.

'As we speak we're rolling out enhanced customer care training to make sure our drivers fully understand how public transport is perceived by a partially-sighted or blind person.'

Katrina adds: 'I want to do an audio piece - a dialogue between a passenger and a bus driver - showing how things should be done.

'I am often accused of lying about being blind.' - See why Fixer Richard Wheeler wants others to know that visual impairment is not always black and white.