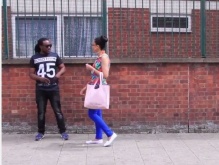 Actors in the Fixers film 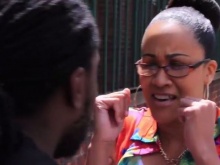 An actress portraying a woman being shaken by her partner 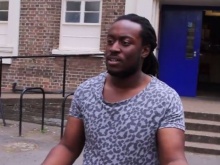 A former partner once hit her so hard he knocked her out - now ‘Sam’ is using her experiences of domestic violence to get others thinking about what’s right and wrong in a relationship.

The 20-year-old from London, whose real name has not been used, wants to help young people understand what constitutes emotional, physical and verbal abuse.

‘I was in an abusive relationship and I want to help teenagers recognise that they don’t have to be,’ Sam explains.

‘I’ve spoken to a couple of girls in unhealthy relationships and they didn't even realise it was abuse – they thought it was normal - perhaps because they haven’t been set the right example.

‘I want to stop other people going through what I went through.’

With Fixers, Sam has created a film showing a young couple in different scenarios.

Audiences will see a dispute over a phone call escalate to aggressive and threatening behaviour and a man criticising his girlfriend’s choice of outfit.

After each scene viewers are asked questions including, ‘Who do you think is in the wrong?’ and ‘How would you feel in this situation?’

Watch Sam’s film ‘Domestic Abuse’ at the top of this page.

‘The film is fantastic. I really like it,’ says Sam.

‘I think it will make a difference in many ways.

‘It’s wrong to think that abuse is just physical. It can also be things like a partner saying they don’t like what you’re wearing and being controlling.’

Sam is hoping to show her film in schools, youth clubs and colleges to help young people identify abuse and encourage them to speak up and tell someone if they think it’s happening to them.

‘Some people want support but they don’t always know where to find it,’ she adds.

‘Showing the scenarios and asking questions may get them to think that their relationship isn’t right and that they need to let go of it.’

If you or someone you know is experiencing domestic abuse, you can contact the National Domestic Violence Helpline on 0808 2000 247 or visit their website.