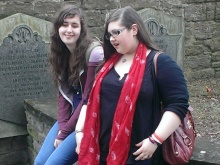 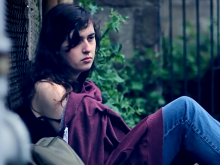 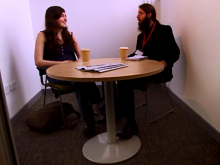 Knowing that life on the streets can be tough, Kimberley Duncan wants homeless young people to be treated as individuals and not seen as another statistic.

The 18-year-old from Forfar, Scotland is concerned that some services aren’t doing enough to help vulnerable people.

While living on the streets, Kimberley says she struggled to find the right support.

Her aim is to show how sometimes even a friendly conversation can go a long way to give someone the confidence they need to turn their life around.

‘When I was homeless, I had the usual feelings of hating the world, but after a while I just learnt to cope with it,’ explains Kimberley, who now lives in a flat.

‘Living on the streets was terrifying though. It was cold, damp and I couldn’t see a way out.

‘But everything changed for me recently when I went to a homeless shelter.

'The staff actually spoke to me like I meant something.

‘My campaign is showing how even the smallest things can matter and just listening to others like me makes a huge difference.’

With Fixers, Kimberley and her team have created a short film loosely based on her own experiences of being homeless.

It follows the story of a young person living on the streets and shows how talking to someone who understands your situation can help a great deal.

Watch 'Homelessness: See The Individual' at the top of this page.

‘The film is fantastic,’ Kimberley says.

‘It can often be hard for vulnerable young people to reach out for help.

‘But one thing that helps is talking to someone who is actually listening to you instead of looking at their watch, which is what the film is about.’

She plans to use the short piece as an educational resource for local councils and support services.

‘This is not about pointing fingers. It’s about working together,' she explains.

‘I’ve been there and know what it’s like to have nothing. But it’s time to show that being homeless doesn’t make you hopeless.’

If you're homeless or having housing problems, visit the Get Connected website for more information on where to get help.