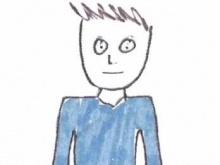 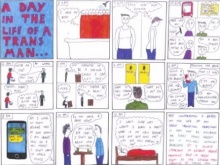 The drawings that inspired the Fixers film 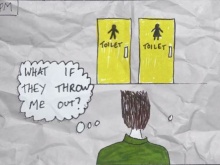 Transitioning from female to male, a Fixer from Bristol is raising awareness of the challenges faced by young transgender people.

'Zack', whose real name has not been used as he wishes to remain anonymous, wants others to accept members of the trans community, while showing those still considering their gender identity that they’re not alone.

‘This is an issue I care about because I’m transgender myself and I don’t think it’s something that many people speak about or understand,’ he explains.

‘In everyday life, there are things that people take for granted which can be extremely difficult for transgender people.

‘I wanted to tell my story in a visual way.’

With Fixers, 18-year-old Zack has created an animated film based on a series of drawings he produced for LGBT History Month.

It looks at a day in his life and explains the personal anguish and feelings of self-loathing that can be experienced by a young transgender person.

It also examines public reaction and addresses some of the dilemmas he faces, including whether to use male or female public toilets and whether or not to tell new friends.

Watch Zack’s film ‘A Day In The Life Of A Trans Man’ at the top of this page.

‘I love the film. I have a sense of pride when I watch it and it tells my story in the right way,’ Zack says.

‘It’s easy to understand and I think the audience will feel empathy when they watch it.’

Zack hopes to show his video in secondary schools, believing that it’s at this age that young people develop an understanding of gender identity.

‘I hope to make transgender people realise that they’re not alone and that it’s OK to face problems because things will get better,’ he adds.

‘I would also like to show those who have less of an understanding of trans people the difficulties we face.

‘I want them to know that it’s not an easy journey.’