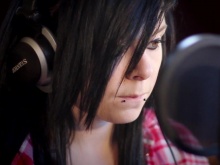 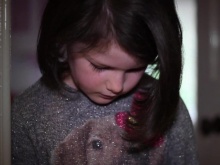 A young actress in the video 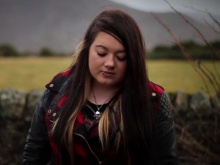 Caitlin Gibson is challenging negative perceptions of young people in care - encouraging others not to judge.

The 17-year-old from Inverness wants to tackle the misconception that young people in the care system are destined to fail in life, after she first went into care aged ten.

‘At the time I didn't understand what was happening to me and I felt quite lonely being on my own in such an unfamiliar place,’ says Caitlin.

‘I was angry and acted up so people just presumed I was a bad person.

‘They had no idea that I could turn my life around. Most thought I wouldn't amount to anything.

‘My campaign is all about urging people to hold their judgment on somebody before knowing anything about them.’

With the help of Fixers, Caitlin has produced a rap song and music video to show that growing up in care doesn’t have to define a young person in a negative way.

It also encourages people to steer clear of stereotypes by understanding that each individual has a story to tell.

Watch 'Kids in Care' at the top of this page.

‘I have always used music as an outlet to vent my emotions because it makes me feel better about myself.

‘I wanted the song to help people see beyond our past and understand we have feelings like anybody else.’

Caitlin intends to share the video on social media, hoping it will prevent both young people and adults from writing off those in care and labelling them as underachievers.

‘Being in care can be a tough experience for many young people which can cause them to feel isolated and angry,’ she says.

‘Maybe if I’d have seen a video like this growing up it would have helped me realise I wasn’t alone.