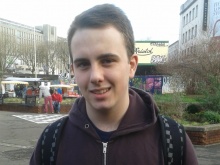 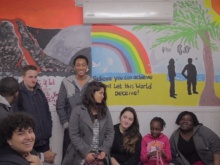 Fixers volunteer at the drop-in centre 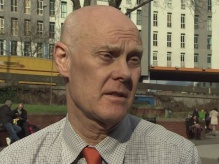 A Fixer is campaigning to change people’s perceptions of the homeless after a visit to a shelter in Bristol forced him to rethink his views.

Seventeen-year-old Connor Hazell was part of a group of young people who volunteered and painted a mural at The Wild Goose drop-in centre last year.

The eye-opening experience gave Connor and his fellow Fixers the opportunity to hear the real-life stories of some of the shelter visitors.

‘I used to attribute homelessness to addiction or thought of it as being a homeless person’s fault,’ explains Connor.

‘Now, I see it is not always in their hands.

In the broadcast piece, Connor meets young people who have been homeless.

They highlight the negative stereotypes that the group hope to challenge with their campaign.

‘People living in hostels, squats or those who are sofa-surfing – they’re all homeless but because you don’t see them they’re hidden homeless,’ says 24-year-old Naomi, who has had to sleep rough in the past.

‘People always assume that it’s just the people on the streets and it’s all men and they’re all drinkers and drug takers.’

‘Bristol, along with other cities across Britain, is seeing a rise in homelessness,’ Nick explains.

‘About 4500 households will approach us this year, either because they are homeless or because they’re at risk of becoming homeless.

‘It’s really important that Connor’s work helps us to break down the stereotypes and misperceptions about who is homeless.’

With the help of Fixers, Connor and his team have created a film to raise awareness of the drop-in centre they visited and the variety of people that use it.

The group particularly want young people to see their film and hope it will encourage more understanding within their community.

Connor adds: ‘If more people grew to see homeless people as actual people, I think we can actually sort out a lot of the problems around Bristol regarding homelessness.’

You can see the group’s Fixers film ‘Hungry, Homeless, Hopeful’ at the bottom of this story.