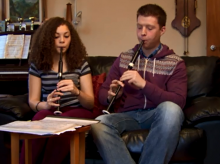 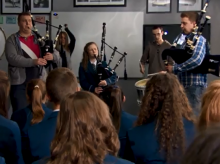 Screening of film at Slemish College 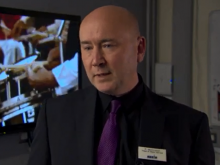 Bagpipes and drums are a huge part of Northern Ireland’s musical heritage, but only 18 primary and secondary schools in the region teach them to children.

Two County Antrim Fixers are determined to change that by encouraging piping to be part of more music curriculum programs in the region.

Their story was broadcast on UTV Live on Thursday 12th December.

Ross Hume (20) and Tineke Westerhuis (18) have been playing pipes since they were children and say it’s part of who they are.

They hope their Fixers project will promote the musical genre among young people and will help dispel any negative connotations linked to parades in the region.

‘I started when I was ten and always liked the sound they made,’ says Ross.

‘I guess there is a bit of a stigma, but religion and politics shouldn’t be an issue - everyone just enjoys the music.’

Fellow Fixer Tineke began playing to continue the legacy of her late grandfather who was a keen bagpiper.

‘He used to play all sorts of instruments but always tried to get me to play the bagpipes,’ she says.

‘After he died, I thought he was really passionate about it and it was something he wanted me to do, so I’ll give it a go.

‘It doesn’t matter where you’re from or you religious background, it’s all about coming together for the music.’

With help from Fixers, the duo produced a film, Pipe Dreams, which they will take to government departments to promote piping and drumming as part of music education in schools.

In the broadcast piece, they show the film to students at Slemish College in Ballymena.

Paul Criksen from the North Eastern Education and Library Board (NEELB) appears in the UTV item backing their campaign.

‘I’m very impressed that these young people have taken it upon themselves to promote this, which is not covered generally by the education and library boards.

‘I hope that this lands on my desk and I can do something about it.’