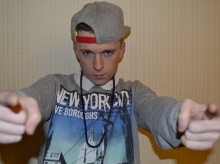 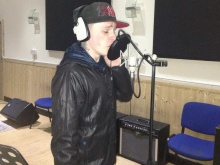 Jamie in the recording studio 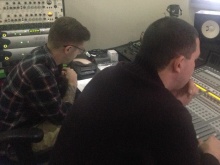 Fixers producers helping Jamie with his track in the studio

A Blackpool Fixer, who credits music for helping him overcome his drug addiction, hopes his audio track will hit the right note in deterring others from substance abuse.

Now clean for more than three years, 21-year-old Jamie Hardman has taken his experiences into the recording studio and hopes rapping about his past will inspire others to do something positive with their lives.

Jamie's addiction began at 16 with smoking marijuana but intensified to using Class A drugs, eventually leading to crime in order to fund his habit.

It was through song-writing that he was able to pull himself out of addiction.

‘Music is like my councillor. It’s always there through my good and bad times, and probably even saved my life,’ Jamie says.

‘I remember it clear as day. About three years ago, I was editing one of my old songs and the lyrics just touched me.

‘It was this single moment which made me think,“What am I doing with my life?” and I’ve been clean ever since.

‘I’m not proud of my past, but ironically without it, I wouldn’t be writing so powerfully.’

Jamie, who aspires one day to make music for a living, created the track - titled 'There is a Way' - with the help of the Fixers Creative Resources team.

He plans to send the song to radio stations and use it on social media to get maximum exposure.

The Fixer hopes to reach 14 to 21-year-olds with his music, because he feels that’s the age when people are more likely to be influenced into take drugs.

‘I want music to change people’s lives like it changed mine,’ Jamie explains.

‘It’s universal and people can relate to it. I hope by creating a track about my struggles, it will strike a chord with some people into making positive choices for themselves.

‘My advice to others is to protect your dreams and no matter how hopeless the situation, you can still make it out the other side.’

Press play to listen to Jamie's track 'There is a Way' and share it with your friends.