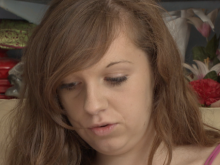 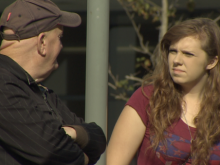 Fixer Becky and her dad 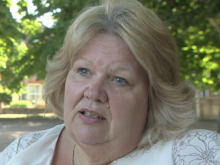 A Christchurch Fixer, who looks after her mum and dad, wants to raise awareness about young carers, so others in similar situations can get support without delay.

Becky Hammerton (18) became a young carer at the age of 10 after her mum was seriously injured in a bus crash.

It wasn’t until six years later, when she was 16, that she was officially recognised as a carer and started receiving help. By this time she was also caring for her dad, who has mental health issues.

‘At home I do the cooking, the cleaning, tidying the house, the budgeting, and my sister and I both do the shopping,’ says Becky, who is a member of Dorset Young Carers.

‘I think there is a massive role reversal, although you don’t realise until you grow up a bit. You just think you’re helping out.’

With Fixers, Becky and other young carers from Dorset, are creating a ‘Big Brother’ style film, inspired by the reality TV programme. It will show an average day in their lives and use the concept of the ‘diary room’ so they can share their feelings.

‘I’m hoping to take it into schools and colleges so that teachers and students open their eyes a little to the different aspects of caring for someone and how it can happen from a very young age and all of a sudden,’ Becky says, speaking about her Fixers film.

‘A lot of young carers will have problems with school. They won’t go to school, or they will behave badly at school. So, I think raising awareness is key.’

Val Mitchell, a Carers Specialist in Dorset, also features in the broadcast piece: ‘The number of identified young carers in the South West is about 16,000. That number has risen by around 35% since the last census.

‘I think Becky’s project is going to be really important. It’s going to help teachers recognise that some of the children they are teaching have caring responsibilities at home. It will also help children to identify themselves as carers.’

Caring Behind the Scenes 9th May 2014