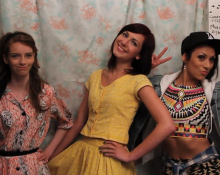 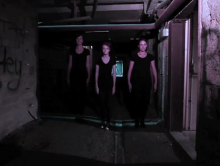 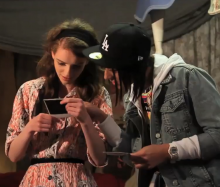 A girl, who was ridiculed at school for her unique fashion sense, has brought a splash of vintage to her Fixers film, which seeks to empower young people to have pride in their individuality.

Part time model Caitlin Rose Stroud (18) of Inverness wants to show it’s alright to look different from everyone else and not be singled out for it.

Inspired by female icons such as Audrey Hepburn, Caitlin used to jazz her school uniform up with quirky 50s fashion, which didn’t always go down too well with her peers.

‘I never really looked like anybody else, and when you look different you get singled out.

‘I had my own close friends, but occasionally I would see others looking at me in a funny way and would hear them call me names.

‘It left me no confidence at all and is something I’ve only got back recently.’

With the help of Fixers, Caitlin’s film introduces a world which has changed, where individuality has gone beyond being the subject of bullying and teasing.

People have stopped trying to be themselves, but they now unhappy with what they have become.

In order to combat this, they have found an underground movement of people who get together to be themselves, at least for a short while.

Caitlin hopes the film, which will be used as resource in schools, will encourage viewers to consider how horrible it would be to force people to conform.

The 18-year-old, who took part in the filming, says: ‘I really enjoyed my Fixers experience and really hope the film is used to promote good.

‘My message to others is look the way you want to look. The world would be a boring place if we were all the same.’

You can watch Caitlin's film at the top of this story.