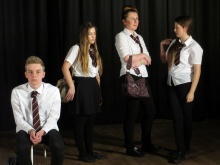 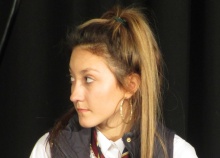 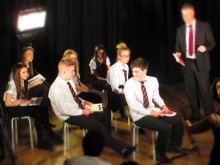 A teenage carer, who feels misunderstood by her teachers and peers, has completed filming her piece, which highlights the pressures on young people and how these impact their wellbeing.

Hatty Berry (16) cares for her mum, Shona, who has a condition called Fibromyalgia.

This muscle condition leaves Shona feeling fatigued and in immense muscle pain at times, meaning Hatty has to be there to help her carry out tasks such as cooking, cleaning, and dressing.

With this comes a lot of stress, and this sometimes causes problems in Hatty’s education and social life as people assume she is not paying attention or is a ‘loner’.

Hatty, a budding actress, decided to use her experiences to create a stage play and film, which shows how problems at home affect a young person.

‘A lot of people do not take the time to realise that you might be worrying about other things,’ she says.

‘This is why I am creating this film “Behind the Scenes” – to show there are usually reasons for someone’s behaviour underneath.’

Filmed at the Old Market Theatre in Brighton, the play follows the story of three teenagers who misbehave in school.

The story shows their school day before going behind the scenes to show what factors in their personal lives are causing them to be anti-social.

Speaking about the play, Hatty says: ‘The play has gone really well. It has been such fun to work with Fixers and get my message out there.

‘Filming has been tiring but was really good fun and I am looking forward to how things come together. I want to thank all the actors and staff who helped produce and film this play.’

Hatty’s film will be distributed among local youth groups and schools in April.