Spreading the Magic Campaign on ITV 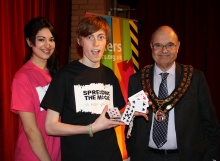 Jordan surprising the Mayor with his magic

A 16-year-old Fixer is spreading magic around his hometown of Tonbridge and nearby Tunbridge Wells, in an effort to lift people’s spirits through his tricks and illusions.

With the gloomy weather and constant reminders of all the bad news in the world, it’s easy to slip into slump. But Jordan Barker hopes the tricks up his sleeve will counteract any cheerlessness in his city.

The film sees Jordan surprising commuters at the railway station and shoppers in the town with his magic.

It also shows Jordan holding a local magic show to teach young people how to perform their own magic tricks – which is even attended by the Tonbridge Mayor.

‘The main aim of my project is to get people to see magic can be found in the most unlikely places,’ says Jordan.

‘Magic is a really great way to leave behind the stresses of life and escape to something which does not just make you smile, but entertains other people too.’