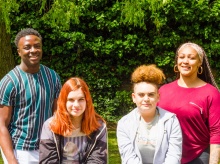 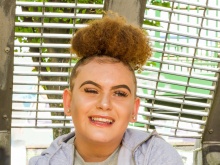 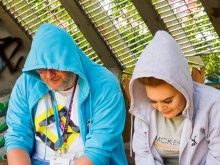 She was 11-years-old and was made homeless. She was forced to leave behind her belongings and move with her mum in to an emergency hostel.

Charlie’s anxiety is better now, but she still suffers with it when she is surrounded by large groups, and for good reason.

The area of Wolverhampton she lives is rife with crime. Her peers carry knives and gangs use guns to keep their turf and control those within it.

When she was 12-years-old, Charlie witnessed her cousin being stabbed.

‘That was normal for me, it was horrible to see, I have never seen anything like it,’ she explained.

‘Young people carrying knives was a common thing when I was growing up. Now they carry guns.’

And Charlie is not immune to the effects of this sinister change in weapon choice. In May this year she had been planning to meet a friend. She admits he had been having problems with another gang, but she never in a million years expected what happened next.

‘He got shot in the head,’ Charlie said. ‘He was in intensive care for a while but amazingly he is alive and he left hospital after a month.

‘It is not nice knowing people your age can bring a knife to you without even a reason.

‘People need to understand it is everywhere. Young people see others carrying a knife so they think it’s normal and join in.

‘Just a few days ago a boy I knew pulled a machete out to scare everyone and then attacked someone.’

Charlie believes the root cause of the knife crime epidemic is broken homes. She hopes agencies and all those involved with young people will support children whose parents have separated.

The GCSE student has created a video with the help of music producer VITAL. It explores the effects anxiety has had on her and offers a glimmer of hope to other young people experiencing problems with their mental health.

‘Charlie is an amazing person, she has gone through so much and now look at what she has done,’ said VITAL.

This project was supported by West Midlands PCC.