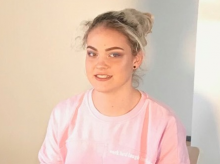 Leanne Hardy was diagnosed with EDS when she was 12. 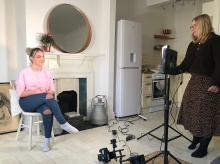 It upsets her when people don't believe she is ill. 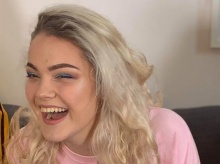 She has created a leaflet with Fixers to share her message.

Despite suffering crippling pain on a daily basis, Leanne Hardy says people often question whether she is really ill.

Diagnosed with a rare genetic condition called Ehlers-Danlos Syndrome (EDS) when she was 12, it means her joints are much more flexible than they should be.

Fed up with people being dismissive towards her because she doesn’t ‘look’ unwell, Leanne has devised a leaflet with Fixers to educate people on invisible illnesses and disabilities.

‘To me, my condition definitely isn’t invisible and it causes me constant pain,’ says Leanne, 17, from Ashford.

‘Although you can’t see anything wrong with me, it doesn’t mean that there isn’t.’

It was five years ago that a specialist spotted that Leanne has EDS, after years of significant joint pain.

Formerly a keen dancer and gymnast, it had previously always been written off as a result of her five hours of training every week.

‘After my diagnosis I went into a state of severe depression,’ she says.

‘I was told to focus on English, maths and science at school and drop the other subjects because I was going to need to have lots of time off.

‘I had always dreamed of a career in drama so it was pretty awful.  But after three months of feeling extremely low, I decided that I was going to prove people wrong.

'I ended up doing media, drama, German and history and did well in my GCSEs.’

There are varying forms of the connective tissue disorder, but the type Leanne – who is now studying for three A-levels - has causes hypermobility which means her joints including her shoulders, hips, knees and fingers regularly dislocate.

It means everyday tasks such as brushing her hair, tying her shoelaces and doing up buttons are a challenge.

As well as being incredibly painful, the complex condition means Leanne also suffers from chronic fatigue and gastric complications, amongst other issues.

She takes strong painkillers Tramadol and Morphine every day, and manages her condition as much as possible with lots of physiotherapy and hard work.

‘On a scale of one to ten, I would say my pain is usually at about a seven.  But on a bad day, I can’t walk the ten steps between my bed and en-suite bathroom.  I have to crawl there because I’m in such agony.’

For Leanne, standing up for any period of time is painful and can damage her joints.

A regular bus user, she often travels between her home and Ashford town centre, which is a 30-minute journey.

‘I need to use a priority seat when I get the bus.  People have shouted at me for sitting in one before because I look like a healthy teenager.

‘It’s really awful and on one occasion when I was about 14, I stood up and ended up getting off way before my stop and calling my mum in tears to come and collect me.

‘These days, if someone says something, I tell them I have a complex genetic disorder but at that point I didn’t know how to handle it.’

Disabled toilets can also pose a problem for Leanne.

‘Sometimes my hips will lock and it’s hard to stand up, so the handrails in a disabled loo are very helpful,’ she says.

‘People often stare at me when I walk out of them and so in busy places like Ashford town centre – which only has four disabled loos -  I avoid using them even though I need to.’

With Fixers, Leanne has made a leaflet called I have an invisible illness/disability: A guide to help you understand me. 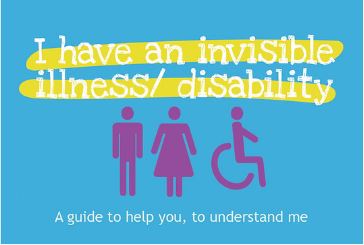