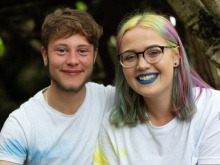 Mason and Ellie want people to stop dressing for others. 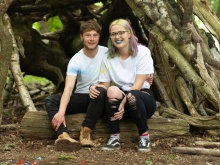 They made a film to get their message across. 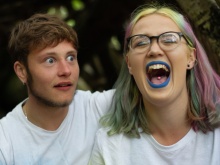 The pair say nothing looks better than self-confidence.

That’s the message two friends from Ashford want young people to take from the short film they’ve made with Fixers.

Inspired by their own experiences, Ellie Davies and Mason Wheaton, say they have been much happier ever since they decided to stop dressing to fit in.

‘We want young people to stop feeling like they have to wear expensive brands or conform to certain stereotypes in society,’ says Ellie, 17, who works in retail.

Mason, 24, a carer, adds: ‘It puts pressure on young people and their families to keep up with trends and that can cause arguments at home.

‘It can also be the cause of bullying in schools and it has a negative impact on many young people’s mental wellbeing and self-esteem. We want to go against that.’

Ellie says she used to get hung up on feeling like she had to dress a particular way to be friends with certain people.

‘I have experimented with a variety of fashion senses and friendship groups.  I know lot of different ‘types’ of people and been friends with all of them.

'But I found - for example - if I wore fishnets, dark clothes and a choker I was called an “emo”, and if I wore a tracksuit I was a “chav”.

‘I decided I wanted to find my own style.  Nobody should be labelled.  We are individuals not categories.  People assume you have to dress a certain way to be friends with people, which isn’t the case at all.

‘Now I don’t care and leave the house and think, this is me.’

The duo say social media has put even more pressure on young people when it comes to how they look.

‘Social media constantly shows young people images of models or people who have lots of money.  It gives them unrealistic expectations and makes them aspire to being someone they’re not.’

Mason, a carer, says: ‘I haven’t cared for a long time now when it comes to what I wear and I’ve felt much better for it.

'Neither of us feel like we have ever really fitted in and it has affected our mental health in the past.’

The pair hope their film will be shared widely on social media, and are in the process of designing t-shirts bearing the logo #NoLabelLabel to convey their message further.

Ellie: ‘The clothes you wear don’t define anything.  They are just something that cover your body.  If you are comfortable and confident you look good.’

This project was funded by Colyer-Fergusson.