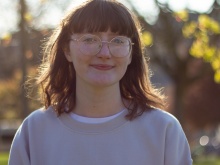 Nancy and her friends want to cut plastic pollution 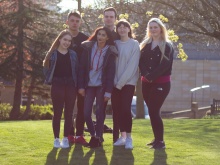 Nancy and her group of Fixers 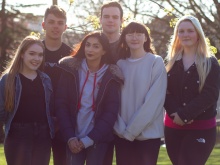 A group of young people from West Yorkshire is asking primary school pupils to think carefully about how they get rid of plastic waste.

“People think that throwing away one plastic bottle isn’t a problem. But if a billion people think like that, it’s just going to build up and up.

"I’m worried it’s going to get so big and there’ll be so much, we won’t be able to do anything. It’s just going to affect our lives and our children’s lives."

Fixers has helped the group create an animated film.

Seventeen-year-old Nancy explains: “A boy called Ben is having fish and chips and he throws some plastic into a river and then eventually, after he’s done it again and again, when he goes to the chip shop there’s a load of plastic in his fish.”

The group is planning to show the animation to primary school children in Calderdale and Leeds. The main message is to encourage less use of plastic and more recycling.

“We want to target younger people about plastic pollution,” says Nancy, “because we think if children grow up learning good habits about recycling, they’ll teach their parents and when they have children of their own, they’ll grow up with it and it’ll become the norm.”

Nancy and her friends think plastic pollution has been forgotten as the world concentrates on climate change.

“No-one talks about it. We’re going to grow up into a world where the generation above us has abused plastics so much there’ll be just too much pollution and we won’t be able to make a difference," she explained.

"We as young people are the ones who will be dealing with the consequences so we want to tackle the issue now so people are more educated on why recycling is important and for people to be more aware about the plastics they use, and look at using less of it.”

The group recommends some small steps everyone can make – such as re-usable shopping bags, water bottles and straws.

“If we do something now then we can make a difference.”

This project was funded by the Community Foundation for Calderdale.