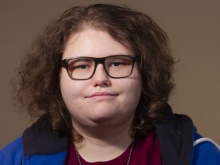 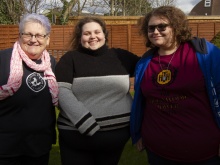 The group behind the video: Lena, Stacey and Hannah.

Hannah wants people to know that they aren't alone after a diagnosis.

A young woman whose mother was diagnosed with cancer is helping others process their emotions following a diagnosis.

Hannah Baker wants to show people they are not alone and encourage them to reach out for support.

She has created a film which she hopes will help people process the words ‘you have cancer.’

‘I just want to help people who are suffering by themselves,’ said the 23-year-old from Stockton on Tees.

‘I want them to know they’re not alone and don’t have to suffer alone, there are people there to support you and loved ones around you.’

Hannah’s mum was diagnosed with an aggressive form of breast cancer and lymphoma five years ago. She needed surgery, followed by a gruelling course of chemotherapy and radiotherapy.

Throughout this she found it difficult to engage with the support services on offer, or to talk about her feelings.

‘Cancer is a word no one wants to hear from their doctor,’ said Hannah. ‘When my Mum was diagnosed I think it didn’t feel real to her. She had so many questions and became quite isolated, shutting herself away. She even felt she had to get a friend to tell the family as she couldn’t face doing it herself.

‘Being given a cancer diagnosis can make people feel like a burden to others. In fact loved ones around them just want to be there for them. The person with cancer just wants to be themselves again and not be seen as just the disease. They can often feel too proud to admit they need help.’

Hannah hopes her film will show people they are not alone and encourage them not to suffer in silence, but instead to reach out to the people they love.