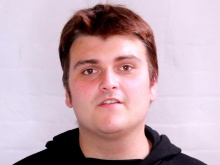 Ben wants people to read, regard and react 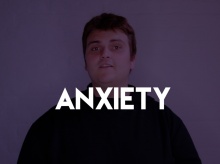 Read. Regard. React. These are the three words a young man is encouraging people to remember when confronted with anxiety.

Ben Rist, 24, is using his own personal experience with anxiety to educate others on how to help.

He has teamed up with Fixers to produce a video in which people are reminded to read, regard and react to their friends who may be having an anxiety attack.

‘Anxiety can affect someone at any time and everyone is different, but if you read, regard and react you can really make a difference to that person,’ explains Ben.

‘It is three simple words that can make the world of difference.’

The young man, from Chatham in Kent, first started suffering from anxiety when he was 13 years old. ‘I was bullied a lot at school and I think that was the start of it,’ he explains.

‘It would all get too much and I would just walk out of the classroom.

‘Now I can deal with it much better. You get to know your trigger points.’

His film, created with the help of friends, shows young people in different scenarios suffering from anxiety.

In one clip a young man has an anxiety attack in a café while another person is left feeling anxious at a bus stop.

‘I wanted to show people who do not have anxiety how to deal with their friends who may have it,’ said Ben.

‘Anxiety can happen anywhere and hopefully this film will help people be aware of it. Sometimes all people need is a hug.’

The film was shown to an audience of young people at the Swale Youth Conference, where it received praise from the viewers.

‘It had a really good reaction,’ said Ben.

‘My hope is the film will go viral so people can learn how to deal with anxiety.’