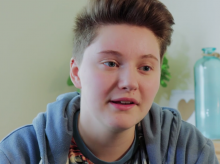 Louie Greenwood in his broadcast film 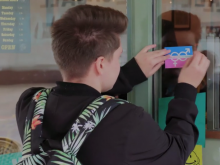 Louie putting up his stickers 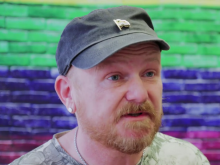 'If I go to the men’s toilet, sometimes you get people saying things to you. I know people who’ve been physically attacked, had verbal abuse. I have been told to leave.'

Twenty-year-old Louie Greenwood, from Swansea, was born female but now lives his life as a man.

He says public toilets are often an issue for transgender people.

His story was broadcast on ITV News Wales on November 9th.

'If I go to the ladies’ loo,' he says, 'people often see me as really masculine. They may get upset and again, you get confrontation.'

To combat the anxiety trans people feel, Louie has enlisted Fixers to help him design stickers to go on the windows of businesses.

The stickers indicate that a particular establishment has gender neutral loos that can be used by absolutely anyone.

There has been resistance to the idea, with people sometimes suggesting that women may be put at risk if they share loos with men.

Andrew Davies, who runs a local support group called Unity LGBT, is supporting Louie's campaign.  He strongly disagrees that the general public are at risk from gender neutral toilets.

'We really need to be looking at the safety of people who identify as transgender,' he says. 'At the end of the day, everybody has the human right that they can go and pee freely, and this is why we need these gender neutral toilets for trans individuals.'

Louie says: 'I would be happy if my project resulted in people being educated. I want them to realise that transgender people have issues going to bathrooms in public places.'