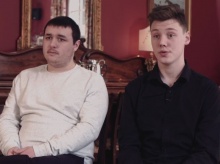 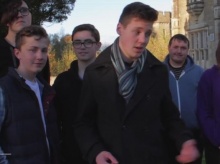 The group created a humorous film with Fixers explaining the condition 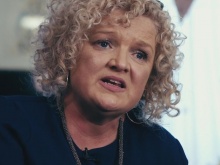 Jo Douglas from The Spectrum Centre supports the campaign

17-year-old Shane Donaghy and Richard Collins, who turns 16 in June, are part of a group of teenagers from Cookstown in County Tyrone who have Asperger’s Syndrome - which is a form of autism.

‘I’m hoping to show that people with autism are no different from others, we’re all the same,’ says Shane.

With the help of Fixers, the teenagers are calling for more support and understanding for young people with the condition.

Their story was broadcast on UTV Live on May 5.

They’ve created a humorous film which explains aspects of the condition and looks at how the word Asperger’s is pronounced.

‘It’s trying to make people almost laugh with those who don’t understand what it is as well as also informing them,’ says Dylan Donnelly, from the group.

Leah Duffy, who is also part of the group, adds: ‘If people could have the chance to look at the world in our view; they’d experience what it’s like for us in a normal day, a normal situation.’

You can watch the Fixers film below.

The teenagers met Jo Douglas, who works at The Spectrum Centre in Dungannon as a consultant psychologist.

‘Asperger’s Syndrome is a rather complex developmental disorder that impacts on an individual’s ability to interact and relate with other people,' she says.

'It affects the sorts of things that most people take for granted such as the ability to form friendships and relationships. Those people with Asperger’s Syndrome just have to make a bit more effort.

‘The support in Northern Ireland is developing. It’s certainly improved in recent years as our understanding and the awareness of autism and Asperger’s Syndrome has been increasing, but it’s still quite patchy.

‘The sorts of projects that are needed are ones that work directly with families and with the young people themselves.’

Richard would like to see more support for teenagers.

‘I felt the support for younger ages is fantastic but more for teenagers growing into adulthood, there wasn’t as much support.  I would love to see that there would be more support widespread over the whole of Ireland,' he says.

‘Kids with Asperger’s are not someone who is different or challenged.  There are a few aspects that we may struggle with but we can do incredible things, we just need the chance.’