Confidence In Coming Out 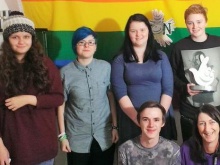 The group from Dunbartonshire 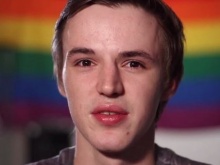 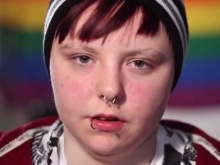 Lewis is among those sharing their experiences in the film

Understanding that coming out can be a daunting prospect for LGBT young people, a group from Dunbartonshire in Scotland are sharing their experiences to reassure others.

The team, led by 20-year-old Courtney Hendry, want to encourage support for LGBT young people about to open up to family and friends, while showing them that they aren’t alone.

‘Before I came out I really struggled with my sexuality,’ explains 21-year-old Daniel McCormick, another member of the group.

‘I had no idea where to find a good support network.

‘We hope that by sharing our stories it will help LGBT peers.

‘Coming out is a terrifying thing to go through, as you have no idea how the people around you will react.’

With Fixers, the group have helped create a film where they explain their experiences of coming out as lesbian, gay or transgender.

They talk about the reactions they received and offer advice to others who find themselves in a similar position.

Watch the group’s film ‘LGBT Coming Out’ at the top of this page.

‘It’s so important to share these stories,’ Daniel says.

‘It allows those thinking about coming out to have a more realistic idea of what the reaction could be.'

The group plan to show their Fixers film to an audience of teachers, youth workers, council representatives and the MP for West Dunbartonshire, Martin Docherty, on Monday 22nd June in Clydebank.

They hope it will then be distributed further in schools and youth clubs.

‘We want our campaign to have a really positive impact, ensuring that we have a supportive environment where LGBT young people can be true to themselves,' Daniel adds.

‘They should know that they are not alone or abnormal.

‘There are other gay people in the world and just because you love a certain gender doesn’t matter.

‘You should never feel ashamed about loving someone.’

Courtney's project was supported by the Wellcome Trust.

A group from Kirkcaldy are campaigning for LGBT rights worldwide.
Watch their Fixers film.