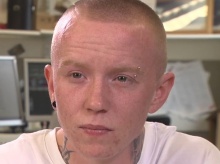 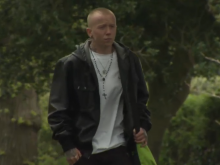 Kay in the broadcast film 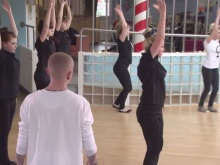 Kay leads a dance rehearsal in the film

‘It was a development over a period of time, from infancy into adulthood. It just progressed and I became more and more masculine and ended up male as if it was a natural process. It wasn’t thought of or planned out in any way.’

As a transgender man, Kay Browning (25) from Tiverton in Devon wants others like himself and those questioning their gender identity to be accepted for who they are.

In the TV piece, Kay speaks about his transition and the discrimination he faced growing up.

‘I’ve had a few things happen to me with regards to prejudice,’ Kay explains.

‘I was once stripped off from the waist down and spat on in a public park.

'Psychologically and emotionally, that was very difficult to bear.’

Kay, who is head coach and choreographer for dance group, the Tiverton Town Majorettes, is working with Fixers to put on an event to promote his message.

‘I want to educate and entertain,’ he adds.

‘I don’t think you can replace prejudice thoughts. You can only pull them out, pick them apart and get people to understand that it’s not the way to live for yourself and for others.’

Andy Hunt from Intercom Trust also appears in the broadcast in support of Kay’s campaign.

‘We work to let people know that there is a life out there that you can have – and this could be for you,’ Andy says.

‘It’s important that young people get that positive message.

‘We’ve also got guidance on offer for schools now – which is so important.’

Kay's project was supported by the Wellcome Trust.

Watch Kay’s TV film here at the top of this page.

Alex Jones wants to tackle negativity directed at those who are transgender.
Find out more about his Fixers campaign.