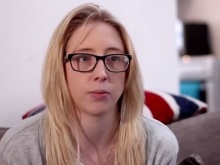 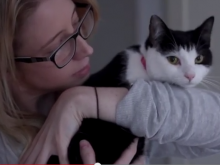 Rachael petting her cat, an activity which takes her focus off her mood 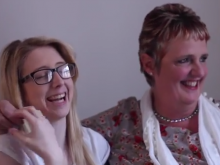 Rachael and her mum Lynne

After feeling like she had to hide her mental health condition, Rachael Johnston is aiming to quash negative stereotypes and encourage more dialogue by opening up about her life with borderline personality disorder.

The 23-year-old from Cheshire, who has started her own organisation for mental health awareness, hopes her story will help others better understand what those with BPD may be experiencing, breaking down the stigma and fear in the process.

‘We are still at a point in society where we struggle to talk about mental health,’ explains Rachael.

‘Conditions such as BPD get a bad press because we only hear about personality disorders when something horrific, like murder, has happened.

‘If only the negative stuff is reported then of course society will be afraid.

‘I don’t want other people to feel as though they have to hide their mental health issues, because they are nothing to be ashamed of.’

According to the NHS, borderline personality disorder can range from mild to severe and is dependent on various factors, with the causes of the condition generally unclear.

‘It took me a while to understand what BPD was,’ Rachael describes.

‘Some days I can cope and other days it can be hell. I feel like I’m trapped in a bubble with everyone else getting on with things around me and I’m just standing still.

‘I can be okay one minute and then suddenly my mood drops which can be horrible.’

To capture what it’s like to live with the condition, Rachael has created a film with Fixers.

She hopes it will inspire those going through difficulties to seek help and will encourage more discussions on mental health.

Watch her Fixers film 'BPD: The Journey Back to Life' at the top of this page.

Speaking about the goal for the campaign, Rachael says: ‘I’m hoping that people will start to talk, even if it's not about BPD.

‘Often we shy away behind closed doors and don’t open up to many people, as we worry that we will be judged.

‘Many young people need to feel able to talk about how they are feeling and not let things get out of control.’